I’ve finally reached the point where I think it’s worth me starting a bit of a ‘Hall of shame’ for some of the worst examples of information design (or more likely, the lack of it) I come across. I realise it puts me in the same category as the angry writers who berate every grammatical error they come across. I hope though, I can use a bit of my knowledge to explain where I think these items fail – in a similar vein to fit to print’s grammar nanny not grammar nazi plea. 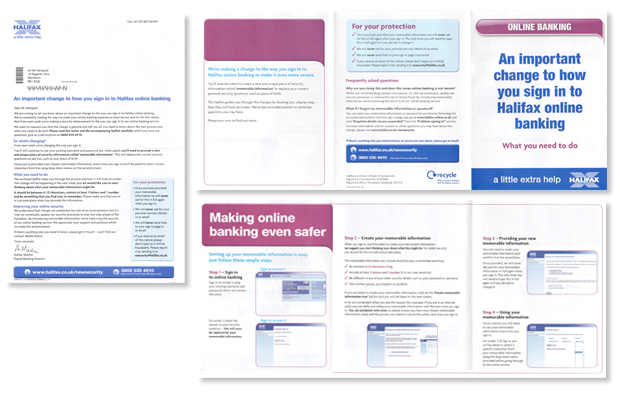 So, for my first hall of shame entry, I nominate this. It is another of those things that came through my door and immediately made me sigh. There are several reasons why:

The very short version of what I’m being told is that at some point I’m going to need to create what is, basically, a second password. That’s fine, happy to do that, but I don’t need the best part of 4 sides of A4 to tell me that.

In fact, the letter is entirely redundant. I’m sure it’s an attempt at the personal approach, and to let me know they’re sorry for the inconvenience it will cause me (although I’m told it’s a simple process). Actually, more inconvenience will be caused by reading through both documents. And I’m certain it will take me longer to read them than it will to make the change when it’s needed.

It’s a waste of paper

If you’ve come across anything else like this that you think deserves to be part of the hall of shame, let me know.