Two of the UK’s largest energy suppliers, British Gas and nPower, have unveiled new bills in the last few months to great fanfare. 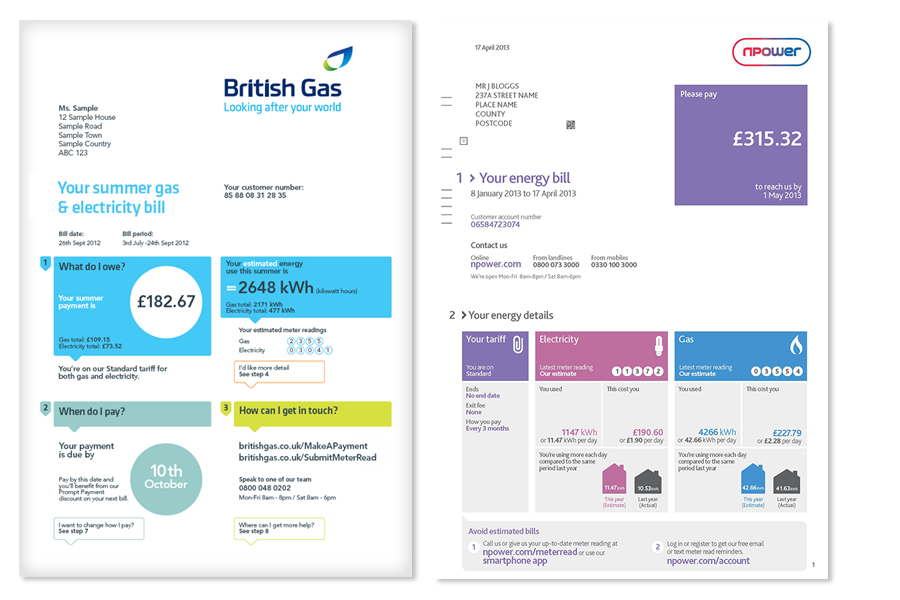 New (and distinctly similar) bills from British Gas and nPower

Skimmers are people who take a cursory glance at their bill then put it in the filing cabinet (or the bin).

Actually, most people are Skimmers until there is a problem: the bill is more than they expected, something on there doesn’t make sense to them etc. Then they become Checkers.

These are the people who check every detail on their bill. They do this for a couple of reasons:

What’s wrong with these new bills

Normally new bills designs sneak out to customers without anyone really noticing, so why such a fuss about these? Because they have been created to be simple and easy to understand. This should make me happy, right? It would if they were, but they aren’t (although they are probably an improvement on what was there before), and here’s why:

No matter how simple the circumstances, the bill is 4 pages long

One of the main reasons the bill are so long are because of the amount of unnecessary information that has been included. The company responsible for the design said in an article on Design Week that “The greatest challenge in the design process was fighting for white space”, but if there is an insistence (possibly at the request of the client via the regulator) to include everything, then the fight for white space becomes harder.

They fail the ‘Skimmers’ by putting the information about how to pay at the end of the bill.

If the bill lands and the amount looks about right (something close to the last one) then I’m the ultimate happy skimmer. Then I have to become a searcher to find the information about how to pay. Because this bill only lands every three months, it’s unlikely I’m going to remember the details.

If you’ve got this many sections on a document, you might as well have a contents list.

What happens when things get complicated?

Designing a bill where nothing happens is the easy part, like in the examples shown above. The challenge is working out what the bill does when something does happen:

It’s situations like this that cause customers have to get on the phone to find out what’s going on. Having this information well presented in the first place is a large step to reduce these calls.

Telling me the same thing every time.

There’s lots of noble information on these bills about what a kWh is equivalent to (in the old days this was less subtle tips about saving energy). If someone is going to read this stuff they will – but will they honestly read it more on more than the first or second bill? Instead of using up bill space repeating this information, provide it in a way that customers will keep somewhere visible (not in a box file).

Not the best use of technology

There are lots of billing software products available which can do lots of wonderful things with data. Whilst these bills clearly make great use of full colour printing available, they fail to pay attention to the presentation of the detail information that causes problems to customers.

Don’t go for the sympathy vote

Whilst these graphics claim to explain what the customer is paying for, the fact that sad, tiny flame at the end shows profit means we’re meant to feel sorry for them. If you want to know how much sympathy that gets you, listen to the outcry next time you announce your profits. This isn’t information customers want to know: it’s information you want to tell them.

Why am I so cross about this?

Because these are being marketed as simple bills. If they were marketed as new, better designed bills I could live with it. But simple they are not.